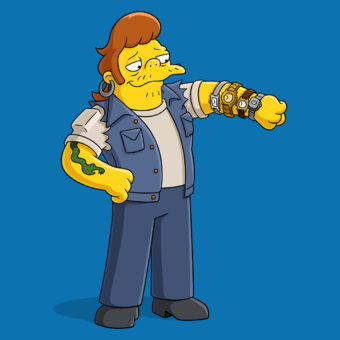 5am – The Snake Dilemma

About 14 minutes to read.

Without saying a word he reached down and popped the buttons on his jeans, my eyes bulged a bit seeing that not only did he not wear underwear under the thick denim but at the monster that must be why his nickname is Snake. With a quick tug down on his pants it popped out, fully erect, and I gasped. I was not like any member I had ever seen. Seven inches long and so girthy that the closest comparison I could make would be a soda can.

Homer always told me they were all the same size…  I didn’t know they came like this.

I eagerly reached up and wrapped both hands around it, BOTH HANDS! It was hot to the touch and pulsed with power. So rock solid that if it wasn’t so smooth and soft to the touch I would have thought it was made of metal. I began to pump it awkwardly at first because I have never had such a manly piece in my hands before and wasn’t sure what else to do, but my body knew. My mouth began to water and with no hesitation whatsoever I threw my arms around to clasp his solid cheeks and pulled myself forward, my mouth held wide.

Before I had realized what I was doing his rod pushed deep into my mouth, stretching my jaw and gliding past the back of my throat well past my vocal cords. I learned two very valuable lessons at that moment. First, my jaw can open very, very wide when I need it to. And second, all the yelling I have done over the years seems to not only have killed any gag reflex but also any feeling in the back of my throat.

The deeper he went the louder he moaned. By the time I had pressed my little nose flat against his pelvis he was shaking. I started to pull it out and he grabbed the back of my head and held me very forcefully, shoving his member just as far down my throat as humanly possible. Luckily, I was able to force breathing through my nose by turning my head a bit so I just relaxed and let him do as he wanted.

I felt him squirt a bit of precum down my throat before slowly pulling my head back. When the swollen tip was nearly out of my mouth I gave his butt a squeeze and he shoved the meat back down my throat. In and out… slowly out, and then forcibly back in. Over and over again. Eventually, I let my arms fall to my sides and just went limp so he could have full control.

That’s when I did something else I never thought of doing before, as he used me like a ragdoll my hand went, quite on its own I assure you, between my legs. I couldn’t help it. I started to furiously rub the devil’s doorbell.

I haven’t swallowed a man’s seed since I learned that with Homer that was always followed, quite immediately, with sleep. But I really wanted him to feed me his. I yearned to feel his tool spasm and pulse and to feel the fullness that I remembered from so long ago. I lost myself in those thoughts, letting them bring me closer to orgasm. Hoping that we would climax together.

I had the time to take a single breath before he roared like a beast and buried his giant manhood inside of me.

It felt like getting impaled, well I mean yes I was being impaled but the sheer size of it compared to what I have been used to all these years had me arching my back and my eyes rolled into the back of my head. It literally blew the breath from my lungs.

It was then that I was reminded that this wasn’t about me, he wasn’t there to make love to me. I was there to satisfy him. A lover would have been slow, made sure I was ok before slowly ramping up the speed.

Not Snake…and I didn’t care one bit.

Snake didn’t even give me a single heartbeat to catch my breath before he was pounding me into the hood of the car like a machine. With each thrust, the hood crumpled momentarily with the force. The depths he touched made me gasp for air.

He hooked his powerful arms under my knees and picked me up so he could slam me down again and again on his incredible hardness. I wrapped my arms around his neck as he bounced me up and down with jackhammer-like pelvic thrusts. He was a bucking bronco and I would not be dismounted, even if it killed me.

I didn’t even notice the orgasm build up inside of me. Suddenly I was just spasming uncontrollably like I had been hit with lightning… moaning like a whore.

He didn’t slow down. He was merciless. He was unrelenting. He. Was. Amazing.

My legs lost feeling and flopped limply… my arms fell to my sides. Yet he kept hammering into me, breathing louder and louder. A rumble built from deep in his chest that quickly grew to a roar.

Suddenly he dropped me to the floor, roughly gripped both sides of my head, and shoved himself back into my mouth.

I had never experienced anything quite so delicious before, his rod was covered in a mixture of his special sauce and my juices fresh from orgasm. I marveled at the taste as he pushed all the way down my throat, my tongue frantically lapping up as much as it could. When I felt him shove past my larynx I moaned with anticipation… the vibration was more than he could handle because at that moment he roared so loud I felt it through the floor. His shaft pulsed with such intensity that each time it did I couldn’t breathe.

But I could feel my hot reward being pumped down my throat.

He came so much that I was on the edge of passing out. But just before I suffocated, the geyser slowed down and then finally stopped. He held himself down my throat for several long moments before pulling his softening rod out. I couldn’t help it, I kept my lips wrapped tightly around it and made sure to lick every inch of it on its way out.

I had just enough energy to catch my breath but not much else so once free I simply slumped over.

Snake pulled up his clothes and patted me on the butt. “Thanks, doll. We’ll call this even.” He quickly hit the button to the garage door and ducked out before it had completely opened, “Wow, I can’t believe that worked!”